Serengeti Kings – An Adventure in the Savannah

This is yet another exhilarating video slot from NetEnt set on the plains of the Serengeti in Sub-Saharan Africa. The safari-themed slot has already been branded as Africa’s Walt Disney where the deadly beasts of the jungle aren’t as deadly but instead really playful. The game features mountains in a backdrop and trees and rocks on the Serengeti plains. Meerkats, zebras, giraffes, hyenas, lions, and panthers are some of the animal symbols that feature in the slot.

Earn real money with Grand Ivy – our top choice for playing this slot in January 2021. 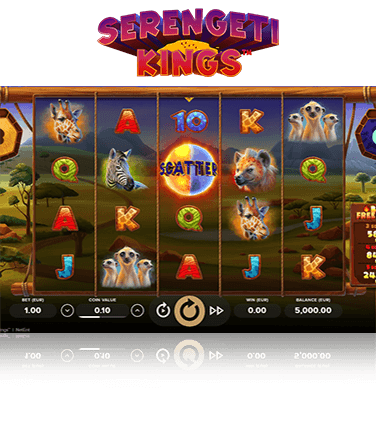 This safari-themed video slot gameplay features 5 reels and 4 rows full of wild creatures and A to 10 symbols and 26 fixed paylines. Serengeti Kings alternates between two modes namely the lion and panther modes each lasting for 12 spins.

During the start of a spin, you collect the lion and panther symbols in their respective counters. The lion spin is usually the first to start and you can collect as many symbols as you can until the 12th spin. On the 12th spin, the lion feature is activated and thus tosses all the gathered lion symbols on the reels.

As it gets dark, you are switched to panther mode where the panther comes to play. Once the spin starts, panthers are collected and dispersed randomly on the wheels. The lion and panther modes can deliver wilds and up to 6x multipliers.

The slot has 5 reels, 4 rows, and 26 paylines that can be played with any bet ranging between 0.10 and 100.00 credits. The lion and panther symbols are the highest paying with 3,4 or 5 on a payline giving 1,2 or 5 times your bet respectively. Wins are earned by getting 3 or more matching symbols on a payline starting from left to right, starting from the 1st reel. The rising sun is the wild symbol and once it appears anywhere on the reels it replaces all symbols except the scatters. 3,4 or 5 wilds pay 3, 10 or 50 times your bet respectively.

The safari-themed slot is a medium to high variance slot with an average RTP of 96.7% which is above average. The slot’s medium-high variance allows you to have a mix of small frequent wins and rare but large prizes and this suits players that prefer regular wins. Unlike most NetEnt slots, Serengeti Kings has a buy feature option and this makes the slot’s volatility fairly high.

The game’s best paying symbol is the wild and it will pay 50x the stake on each line that it fully covers. The game’s multiplier offer of up to 6x enhances your chances of winning higher payouts. The highest potential pay out is 1300x your bet on a single spin.

Conclusion – An Adventure in the Savannah

NetEnt found the perfect way of incorporating the savannah in a slot and executed it to near-perfection in Serengeti Kings. The game’s graphics and gameplay features are a cut above similar themed slots and leaves players begging for more. A mobile friendly easy to use version is available for smartphone and tablet users. The Android and iOS compatible mobile verison is still as enjoyable as the desktop version, nothing has been sacrificed and you rest assured of an enjoyment galore. Despite the lack of a jackpot, you still stand a chance of earning up to 1300x your stake on a single spin and this guarantees you a handsome enough pay out.

Kindly share your experience with the slot in the comments section.

up to £1,500 + 100 Spins on StarburstOur casino suggestion for Serengeti Kings
Overall Rating 9.7/10.0 Play here!
Full T&Cs apply. 18+. New players only. One bonus offer per player. Minimum deposit £20, max bonus bet is £5, bonus spins on selected games only and must be used within 72 hours. Bonus funds must be used within 30 days otherwise any unused bonus shall be removed. Bonus funds are 100% match up to £300 on your 1st deposit, 25% match up to £800 on your 2nd deposit, and 50% match up to £400 on your 3rd deposit. Bonus funds are separate to cash funds and are subject to 35x wagering the total bonus, cash & bonus spins. www.begambleaware.org.
NetEntAll 188 NetEnt slots at a glance
Popular Blog Posts
BetsoftAll 15 Betsoft slots at a glance
QuickspinAll 20 Quickspin slots at a glance
Home > Netent > Serengeti Kings