If you play slot games to win, Net Ent’s Aztec inspired slot should be your next port of call! After all, this 5-reel slots has a total of 243 paylines and ways to win, while there are ‘Nudge’ and ‘Re-Spin’ features to help you bank regular cash prizes!

Whether playing for fun or real money, you can check out Grand Ivy and make the most of your time this January 2021! 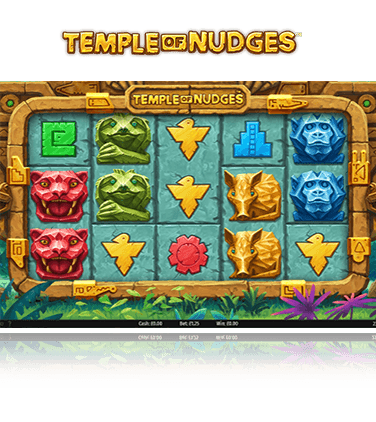 The Slot’s Layout and Rules

A video slot that remains one of Net Entertainment’s newest games, the Temple of Nudges has built much of its success on the deployment of a fluid payline structure. This eschews a small and fixed number of paylines for 243 ways to win, with winning combinations forged by matching symbols anywhere on adjacent reels.

These payline still run from left to right, but they increase your chances of winning significantly even on a slot that features a 5×3 reel grid. This contributes heavily to a return-to-player (RTP) rate of 96.03%, with regular base game wins guaranteed for as long as you continue to spin.

The ‘Nudge’ feature also increases your chances of triggering a cash prize, as this shifts the reels one symbol down and affords you another chance to forge a lucrative winning combination.

This low-variance slot actually boasts a relatively wide betting range too, with a coins range of 0.25 to 250. This allows a maximum wager of £250 per spin, which is relatively high when compared to similar slots on the market.

However, it should be noted at this stage that the the slot’s maximum base game pay out is fixed at 2,187 coins, while the lack of a formal bonus or free spins round will probably deter most from wagering at the highest bet level. You should definitely keep this in mind when playing, particularly when you consider that the majority of base game wins are relatively modest.

Of course, there’s also an ‘Autoplay’ feature, which allows you to automate 10, 25 or 50 spins at any point during the game. This will definitely increase the pace of gameplay, but you won’t be able to alter your bet level during this time.

In total, there are eight symbols featured on the Temple of Nudges, and it’s fair to say that there’s very little difference when it comes to the range of payouts on offer. The least valuable symbols all pay out 1, 2 and 3x your stake when you match 3,4 or 5 or adjacent reels, creating an incremental return at best on your wager.

The colorful animal symbols are the highest paying icons, with the blue monkey, green sloth and orange armadillo paying out at multipliers of 2,4 and 6x your stake when you land three, four or five respectively.

At the top of the pile is the striking red puma, which is a little more generous than the other symols and trigger 3,6 or 9x multipliers. However, there’s no wild or scatter symbols, and this caps the potential winnings on offer considerably.

Are There are Any Bonus or Free Spins Rounds?

As we’ve already touched on, there are no bonafide bonus games or free spins round available when you play the Temple of Nudges. However, there are at least a couple of gameplay elements that may appeal to players, starting with the aforementioned ‘Nudge’ feature.

This is remarkably similar to the cascading reels feature seen in a number of alternative Net Entertainment slots, as the reels shift downwards by one symbol following a win to forge a brand new payline. This process can continue indefinitely too, until there are no more winning combinations to be found.

The highest-paying Puma symbol can also appear as overlay icons during a winning spin. After an overlay land, all matching symbols will lock into place, before the reels automatically re-spin and hopefully deliver a pay out.

This respin feature is another of the slot’s main hooks, although a maximum win here of 87.47x your stake is indicative of low to mid-variance gameplay.

Can You Play the Temple of Nudges on the Move?

The good news is that the game is available on the move, as it’s powered by HTML5 technology and responds seamlessly whether you’re playing on a smartphone, tablet or desktop device.

You also don’t miss out by playing the game on a mobile device, with the bright colours, eye-popping visuals and audio reminiscent of the desktop version.

Given the game is also ideal for casuals playing in short, sharp bursts, mobile arguably represents the ideal platform wherever you may be!

What About Variance? How to Play the Temple of Nudges

As a low-variance slot with a competitve RTP rate of 96.03% and 243 ways to win, players can expect relatively frequent but decidely modest payouts during the base game. This usually favours casual or novice players, as it enables them to manage their bankroll more effectively and bank incremental returns over time.

It’s much harder to see any value in the game from the perspective of high-rollers, as while a single nudge or re-spin may earn you up to 80x your bet, this is not the largest jackpot prize and certainly not enough to justify the maximum bet limit.

It’s also rare to land such a win, so we’d also recommend playing in short and sharp bursts and aiming to earn up to 20% on your bankroll in the best case scenario. Just remember; while this is a charming and simple slot that’s deceptively engaging, its small payouts are unlikely to offer value over time.

With the Temple of Nudges, what you see is what you get, with its innate charm and simple gameplay slightly offset by low payouts and the lack of any defined bonus or free spins round.

However, by featuring a fluid payline structure and more than 243 ways to win, the slot has also managed to become slightly more than the sum of its parts since its launch last year, and can at least offer frequent base game triumphs.

Ultimately, this is a slot for risk averse and bankroll conscious players, who want to bank regular wins rather than chase huge jackpot payouts. Whether this is good or bad depends on your outlook, but what’s great is that players know exactly what to expect when loading the game.

We’d love to hear your thoughts on the slot, so feel free to drop us a line in the comments box below!

up to £1,500 + 100 Spins on StarburstOur casino suggestion for Temple Of Nudges
Overall Rating 9.7/10.0 Play here!
Full T&Cs apply. 18+. New players only. One bonus offer per player. Minimum deposit £20, max bonus bet is £5, bonus spins on selected games only and must be used within 72 hours. Bonus funds must be used within 30 days otherwise any unused bonus shall be removed. Bonus funds are 100% match up to £300 on your 1st deposit, 25% match up to £800 on your 2nd deposit, and 50% match up to £400 on your 3rd deposit. Bonus funds are separate to cash funds and are subject to 35x wagering the total bonus, cash & bonus spins. www.begambleaware.org.
NetEntAll 188 NetEnt slots at a glance
Popular Blog Posts
IGTAll 89 IGT slots at a glance
iSoftBetAll 45 iSoftBet slots at a glance
Home > Netent > Temple of Nudges