Inspired by the notorious train robberies in the wild west, this slot from NetEnt is available on all desktop and mobile devices, offering user experience hard to match with stunning graphics, intuitive gameplay, and generous bonus features. Check out the free version below!

Want to make some cash? Play the game for real money at Grand Ivy – our recommendation for January 2021! 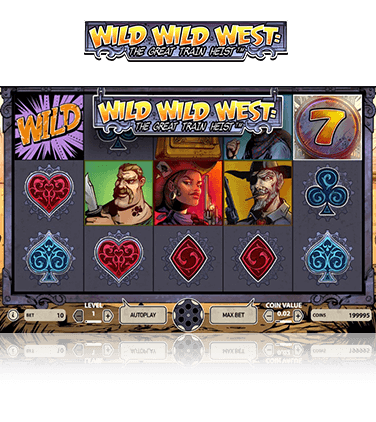 It Gets Really Wild Out There!

Fun fact of the day – Jesse James may have gone down in history as the most infamous train robber but neither the first, nor the largest train heists were actually done by him and his gang. And now, back to the game whose full name is actually Wild Wild West: The Great Train Heist. The matrix of the slot is the familiar five reels and three rows, so no surprises here. You can select from 10 paylines and bet anywhere from £0.1 to £100. The developers have done an outstanding job with the graphics which give the game a comic book feel. The highest paying symbols are the train robbers – a very badass looking lady, two equally tough looking men, and a younger cowboy who may not be all muscle but his shrewd face sure makes us feel like he has the brain and guts to pull off a train heist that will enter the annals of history. The lower-value symbols are the four card suits – diamonds, spades, hearts, and clubs, again beautifully crafted. There are four wild symbols in the game – a regular, an expanding, a spreading, and a 2x multiplier wild. The number seven train symbol is the scatter that activates the free spins which can be retriggered to reach a total number of sixty free games.

Bundles of Free Spins and A Multitude of Wilds

We may go out of our way, throwing witty Stetson and pistols references around but we think that just a single spin would be enough to make you see the full potential of this Wild Wild West slot. With visuals by the book and a matching soundtrack, this is a game that will have you stick around and enjoy awesome bonus features, too. Watch out for the golden safes which can get you between 5x and 50x your stake in the ‘Click to win’ feature. Three, four, or five train scatters will land you ten, twenty, or thirty free spins respectively which can be retriggered. The four wild features further enhance the winning potential – a regular wild appears in the base game only, while a random pick of the wild selector wheel will determine which of the three other wilds will appear randomly on reels 1 through 3 on every single free spin for the duration of the round, including retriggered free games. The 2x wild will double your win total, the spreading wild spans the three reels on the row it appears for a guaranteed win, and the expanding wild covers the whole reel it appears on, so you can get as many as three entirely wild reels! Who needs robbing trains when you can get so many chances of great winnings? Let us know what you think about this slot by leaving a comment in the section below!

up to £1,500 + 100 Spins on StarburstOur casino suggestion for Wild Wild West
Overall Rating 9.7/10.0 Play here!
Full T&Cs apply. 18+. New players only. One bonus offer per player. Minimum deposit £20, max bonus bet is £5, bonus spins on selected games only and must be used within 72 hours. Bonus funds must be used within 30 days otherwise any unused bonus shall be removed. Bonus funds are 100% match up to £300 on your 1st deposit, 25% match up to £800 on your 2nd deposit, and 50% match up to £400 on your 3rd deposit. Bonus funds are separate to cash funds and are subject to 35x wagering the total bonus, cash & bonus spins. www.begambleaware.org.
NetEntAll 188 NetEnt slots at a glance
Popular Blog Posts
IGTAll 89 IGT slots at a glance
MicrogamingAll 408 Microgaming slots at a glance
Home > Netent > Wild Wild West