Toki Time Slot is a five-reel video slot from Thunderkick featuring dancing mushrooms, clouds impaled by rainbows, and antler-adorned alpacas whose giant necks double as expanding wilds. It is, quite frankly, ridiculous, adorable and morally bankrupt at the same time. You can win both ways, and winning with expanded wilds triggers respins, so all things considered, there’s a lot going on. Play our slot demo right here!

Playing for real money is a distinct possibility at 777 Casino, the most bodacious casino for April 2021. 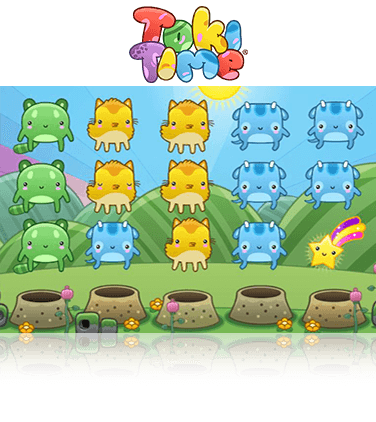 What are the Rules and Features?

Something must have been in the water at Thunderkick’s studios when Toki Time made the journey from just a sparkle in a game designer’s eye to the fully-furnished fun bag it is today. Five mini volcanoes, wedged into green grass, explode colourful cartoony creatures from their circular crevasses, blasting them into a smiley sky and yonder into a Nintendo landscape. A five-by-three grid of critters floats airily, rife with contentment, unaware of their impending fate and apparent doom in the hills beyond. Meanwhile, a band of bouncing mushrooms and taunting tulips egg the poor, oblivious creatures on, as night turns to day turns to night. Every so often, the aforementioned alpaca-deer hybrid excretes clumsily from a malevolent mini volcano, facilitating potential re-spins, which are in turn celebrated with a chorus of 60s porn groove straight out of Austin Powers. The soundscape is utterly transmogrified from the pugnaciously childish base jingle that would drown a Tellytubby in tears of joy. From purely a mechanical perspective, there is a lot to appreciate here. With a high return-to-player rate of 97.1%, allied to regular re-spins and 11 lines paying both ways, fun can be had and money can be won. Betting limits are varied enough to accommodate both picky punters and haughty high-rollers alike, while high-paying stars and clouds, replete with their rainbow mohawks, provide the potential for thrills and spills in regular gameplay.

See the Game in Motion Here

Conclusion – Good Fun but Not for Everyone

It’s worth remembering that this is indeed a gambling product, and despite having characters so cute a grown man would hug his screen, there is something undeniably pre-school about this creation. Whether the aim was to captivate the minds of toddlers while their single mums engage in their gambling habits remains to be seen, but clearly this is a dark path upon which to amble. If you are over 18 and there are no wee nippers in sight, then you can have some guilt-free fun with Toki Time. If you’ve given the game a spin, let us know what your thoughts are using the comments box below.