For 99% of players, upon booting up an online slot the first button they press is not ‘spin’ but ‘mute’. Let’s face it, this corner of the market is soundtracked like a Eurovision Song Contest karaoke night for failed entrants to Britain’s Got Talent. Thunderkick has not only trumped all competition with the tunes on the Flux slot, it has embarrassed the market and changed the game. Honestly, this thing sounds like a Jean-Michel Jarre loop. Shame about the gameplay, though.

Want to try this one for real money? Go to 888casino, which is our top choice for playing this slot in July 2021. 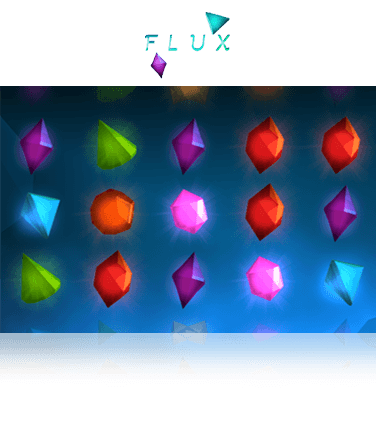 So, we’ve established that Flux sounds great, but how does it play? Well, in that regard, I’m afraid the news is not quite as positive. There’s nothing wrong with the gameplay per se, it’s just a bit bland. The three rows by five reels layout feels tired and repetitive, even if the symbols look sharp and the animations are slick. There are three bonus games integrated but, honestly, you can barely even notice them. Matching between three and five bonus symbols will trigger one of the special rewards. There’s win both ways, three extra rows and win both with three extra rows combined. The game moves so quickly that you’ll struggle to notice these features in motion. Now and again you’ll trigger a bigger win and realise you’ve landed one. Seriously, though, all of this is supplementary to the trance-induction soundtrack!

Conclusion – Did We Mention the Mega Soundtrack?

Flux really is a game of two halves. The gameplay is a bog-standard, but we still find ourselves returning to this one again and again. The fact that Thunderkick’s auto play feature allows up to 1,000 uninterrupted spins means that can almost stick this game on like you are listening to an ambient album. Put your feet up, pour yourself a drink and just watch and listen. It is all incredibly calming. Just be careful you don’t while away too much of your bankroll while you are dancing.