Top 10 Fairy Tale-Themed Slots That You Can Play Online

Fairy tales are not just for kids you know! Sometimes, you just want to escape from everyday life and immerse yourself into a magical world full of fairies, witches, dragons and goblins. The great news here is that fairy tales are the inspiration for a wide range of exciting online slots. From Snow White and the Seven Dwarfs to The Three Little Pigs, and every make-believe story in between, you will find tons of games within the genre. 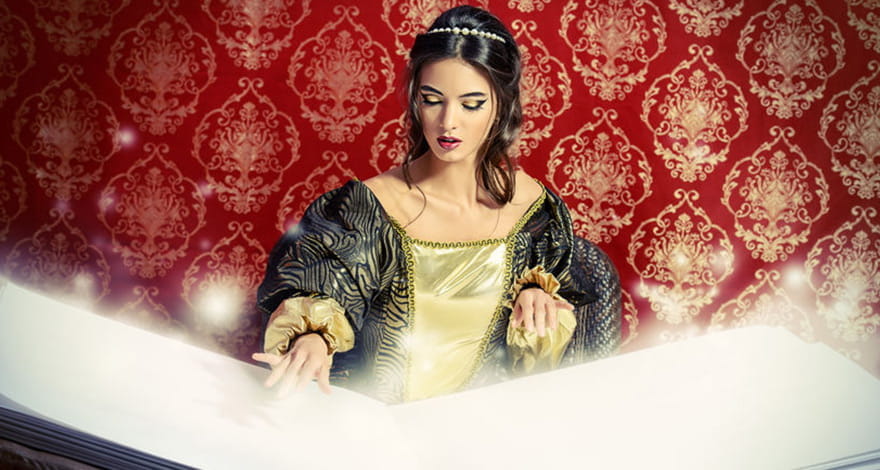 In this article, I will give you an overview of the 10 best fairytale-themed slots that you can play online. Follow the links you can find further down the page to visit the individual slot reviews of the games where you can find all the information you need and try the free demo game. 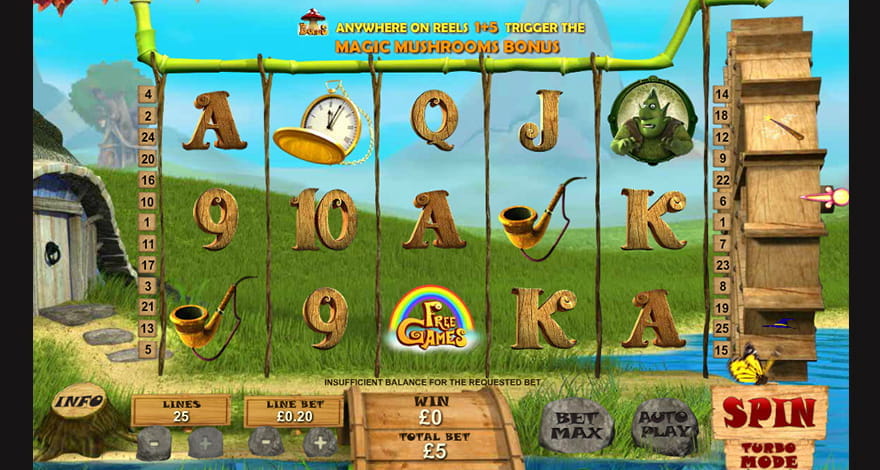 Set firmly in the realm of make-believe, this Playtech video slot is great fun to play. When you launch the game, you’ll see a cartoon intro video, with a magical wizard and dainty fairy scattering fairy dust, whilst a scary ogre steals mushrooms, and the hero of the story, a spritely elf, courageously takes them back. It is not simply the fun, fairy tale theme which makes this game so appealing though. It is packed full of rewarding features. The fortune wheel rotates beside the reels upon every spin and can award a range of fantastic features, including cash prizes, expanding wilds, re-spins with freezing wilds and magnificent multipliers. The game also boasts Rainbow free games and the Magic Mushroom bonus. With superb graphics and cheerful music, Fortune Hill provides a magical playing experience! 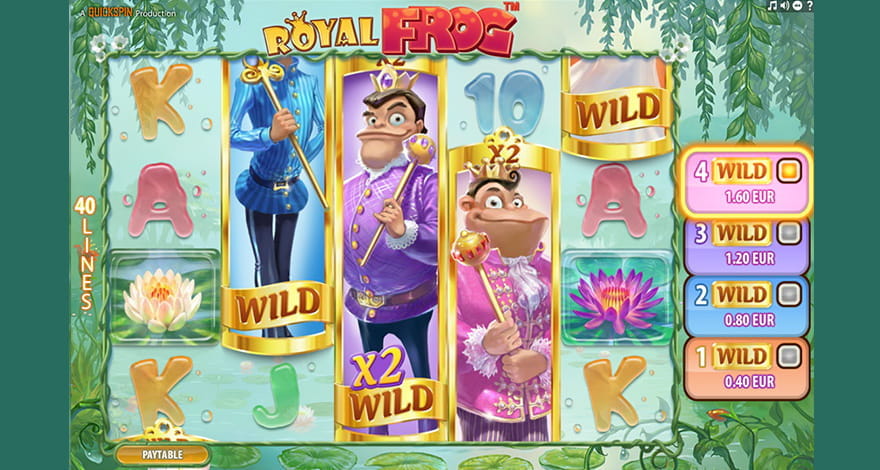 The Frog Prince is a classic fairy tale, best known from the version written by the Brothers Grimm. It tells the story of a spoiled princess who befriends a frog, which magically transforms into a handsome prince upon her kiss. The timeless tale is the inspiration for this Quickspin video slot. Yet forget puckering up, in this game, you transform the 3 frog symbols into stacked Prince wilds with an additional bet. This enchanting game has beautifully coloured defined graphics and music which would befit a Disney princess movie. The slot features a free spins bonus, where extra wilds and multiplier wilds are added to the reels, for the chance to grab some royal winnings.

#8 Pixies of the Forest 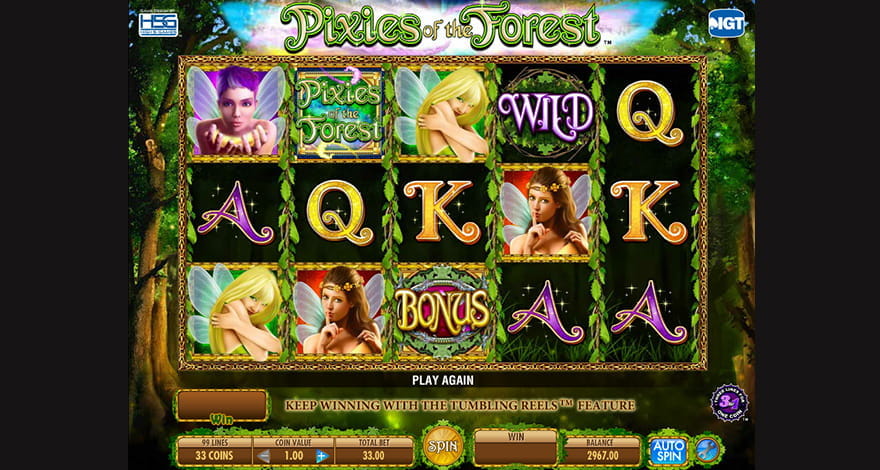 There are so many fairy tales which are set within enchanted forests, filled with magical and mystical creatures, and that is where Pixies of the Forest takes its inspiration from. The three pretty pixies sprinkle their fairy dust and add plenty of sweet giggles as you play, creating a truly magical atmosphere. The slot includes the Tumbling Reels feature, where any winning symbols disappear and are replaced with new ones. This innovative feature means that from just one spin, you can stack up numerous wins. There is also a free spins bonus, where you can earn up to 11 free games with super-rich reels, creating the possibility of impressive wins. 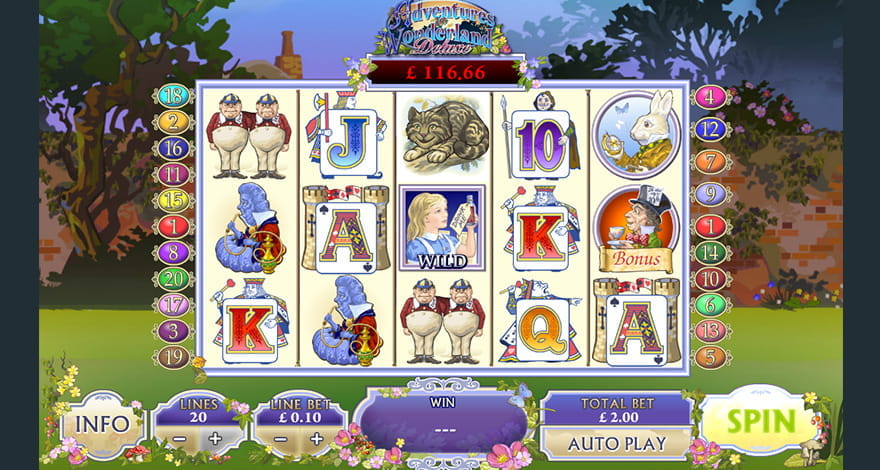 Lewis Carroll’s timeless novel, Alice’s Adventures in Wonderland is a classic fairy tale fantasy adventure story which has retained its popularity throughout the centuries. Whilst there are numerous online slots which take the traditional story as its inspiration, the best of these is Ash Gaming’s Adventures in Wonderland. You’ll see all the familiar characters in the game, with the Cheshire Cat, Tweedledee and Tweedledum, and, of course, Alice. The game includes tons of exciting features which bring the theme to life, with the Mad Hatter’s Tea Party bonus, the Rabbit Hole bonus and Pocket Watch bonus. The game also boasts a progressive jackpot.

#6 Piggies and the Wolf 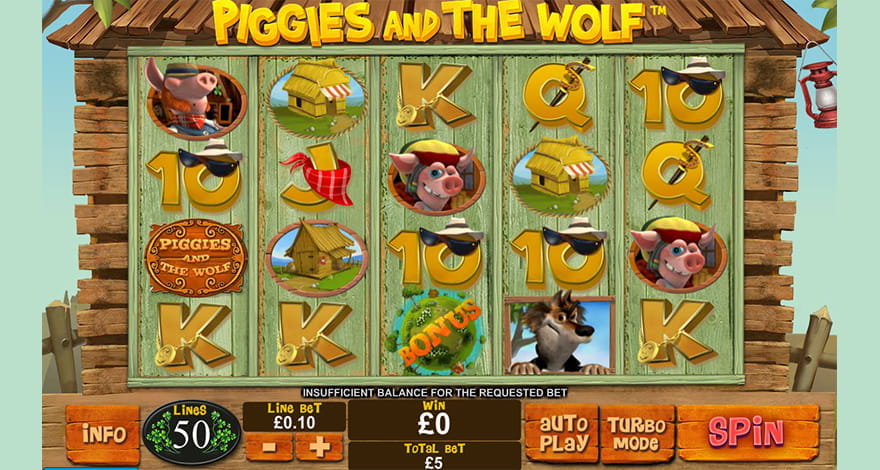 We all know the fairy tale of The 3 Little Pigs and this Playtech slot adds a comical spin on the classic children’s tale. In this slot, the piggies include a stoner in his lacklustre straw house, a banjo strumming country-bumpkin in his mid-range wooden house and the rich and dapper chap in his indestructible brick house. The game features slick and sharp graphics, including a fun intro video that sets the scene. The game includes plenty of rewarding features that up the excitement of the gameplay. The Huff N’ Puff shuffle feature sees the cool wolf blowing symbols off the reels for a shot at more wins. There are free games with pigs running wild. Plus, the Blow the House Down bonus can provide some epic wins. When you play Piggies and the Wolf, it’s fun all the way! 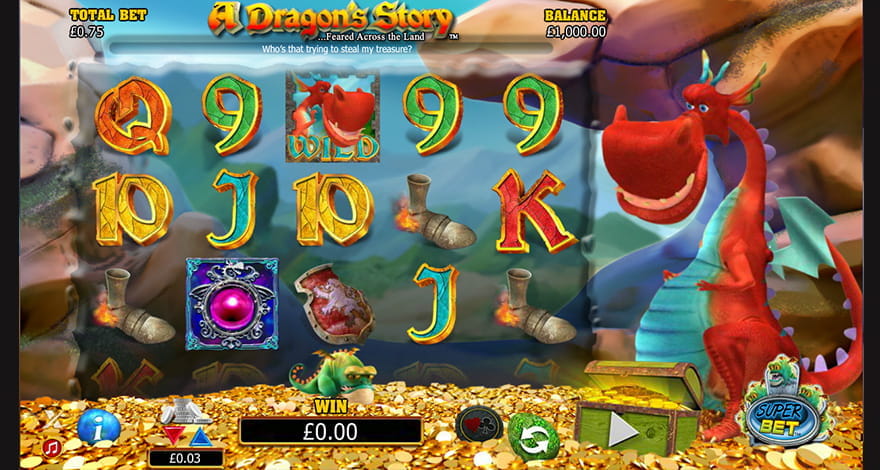 Many classic medieval fairy tales feature a brave knight battling a fierce dragon. That’s the fairy tale that provides the theme for A Dragon’s Story. Although, the scary fire-breathing dragon in this slot has quite a cute edge to him. A highlight of the game is the Superbet function. This feature, which can be found in a range of NextGen slots enables you to enhance the reels by placing an additional bet. In this case, by activating the Superbet feature, you add more little dragons to the reels which in turn reward more wilds. The slot includes a lucrative free games feature, with extra wilds and double wins. There is also the Brave Sir William bonus where you can win up to 1250x your total bet. 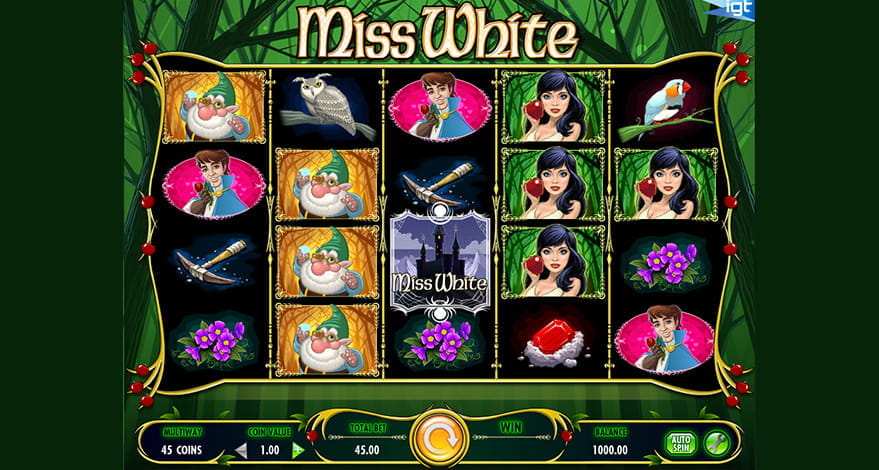 One of the best loved fairy tales of all time has to be Snow White and the Seven Dwarfs. The charming story was the earliest Disney animated feature film ever made, and is still loved by both adults and children to this day. IGT have taken this much-loved story and created an exciting and enchanting video slot. Miss White includes all the imagery you expect from the story, with the beautiful leading lady, the handsome prince, the wicked witch and the dwarfs, all captured with beautifully sharp and colourful graphics. The slot boasts some impressive features, including End2End symbol expansion, MultiWay Xtra wagering and the Magic Mirror free spins bonus. 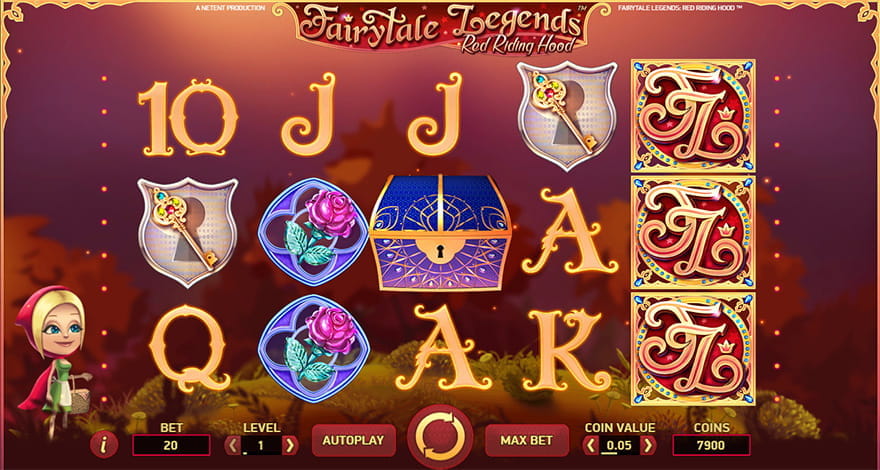 Don’t talk to strangers; listen to your elders; Little Red Riding Hood is not only a fun and entertaining fairy tale, but one with a very clear moral to the story. The origins of the fairy tale can be traced back as far as the 10th century, and it is a story that still captivates audiences nowadays. In Fairytale Legends: Red Riding Hood, you find a fun and entertaining slot based around the classic tale. As you would expect from a NetEnt slot, it features the highest quality graphics, captivating sound and plenty of rewarding features. These include the 3 random features; Fairy Magic Spin, Fairy Surprise and Fairy Wild Spin. Another highlight is the bonus feature. Pick from 3 treasure chests to reveal a coin win, free spins or the board game-type Beware the Wolf bonus.

#2 Jack and the Beanstalk 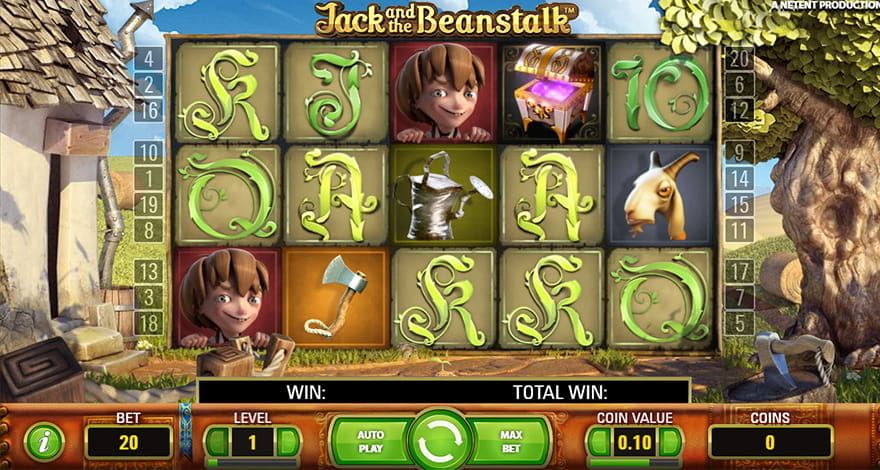 The Jack and the Beanstalk slot immerses you into the fairy tale world of angry giants, the goose that lays the golden egg and the young boy who was not so foolish for trading in his cow for magic beans. This NetEnt slot brings the fun fairy tale to life with detailed graphics, 3D animations and exciting music. The slot includes some imaginative features, that not only reflect the theme well but also up the excitement levels as you play. The Walking Wilds feature awards re-spins until the wild works its way across the reels, boosting your chances of wins as it moves. Furthermore, all wilds wins are tripled. Yet the true highlight of the game is the free spins bonus. See Jack climb the giant beanstalk to the castle in the sky, where you play the free games. The free spins include the treasure collection feature. Collect the keys to earn stacked and expanding Walking Wilds, which provide plenty of winning opportunities.

#1 Wish Upon a Jackpot 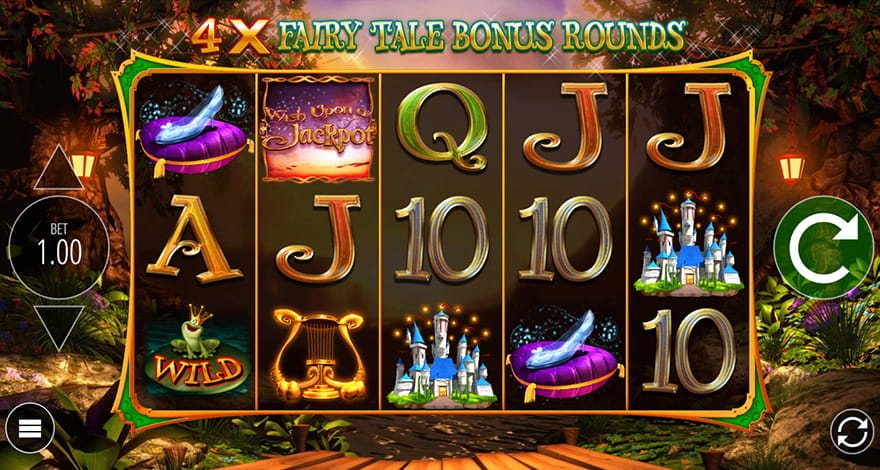 If you are in the mood for playing a fairy-tale themed slot, but are undecided which story takes your fancy, then Wish Upon a Jackpot could be just the game for you. This fun slot incorporates some of the best fairy-tales in one game. You’ll find Pinocchio, the Gingerbread Man, Puss in Boots and many more lovable characters from popular fairy tales. The Fairy Godmother Spin feature can be triggered randomly during any spin, awarding one of five fairy-tale themed features. There are also 4 Fairy Tale bonuses, including 3 Little Pigs free spins, Rapunzel free spins, Jack and the Beanstalk bonus and Rumpelstiltskin’s Deal Maker Bonus. With superb graphics and enchanting music, this game has everything you could ask for in a fairy tale-themed slot, and then some!

As you can see from our listing, fairy tale-themed slots present a perfect way to dive into the magical world of make-believe stories, while being able to have some fun and win some cash. All of our recommended slot games offer fascinating bonus features where the charming imaginative story heroes reward players with attractive rewards. Most of the best slot sites have at least one fairy tale-themed slot in their game library, so that fans of this genre can escape the monotonous everyday life and set sail in the fascinating universe of fantasy.

Since you’ve entered the world of fairy tale slots and have seen the top 10 suggestions we’ve provided, there may have been certain questions which might have arisen. Therefore, we’ve done our best to gather all of them in the FAQ section below which you’ll surely find interesting if you’re a fan of this slot theme!

🦄 Is there a fairy tale slot based on a real tale?

When it comes to creating fairy tale slots, the imagination of software providers sometimes stears into a direction where classic tales get their very own slot versions. This is the case with the Royal Frog slot which is based on work from Brothers Grimm.

Slot players like to have lots of winning possibilities and that's why certain providers have decided to add more than traditional symbols and bonuses to their games. Having that in mind, the Miss White slot can definitely be among your new favourites with its free spins bonus, extra wagering, symbol expansion and more!

🧞‍♂️ Are there fairy tale slots where famous characters from tales are added?

Fortunately for the fans of fairy tales, there are such slots which have some of the most famous characters added in one place for maximum excitement. One of them is the Wish Upon a Jackpot slot where other interesting features can be found as well.

🧙‍♂️ What mythical fairy tale slot games can be found?

Since some tales are based on myths, it's no wonder why fictional creatures have been added. When we talk about such figures, a dragon is the first thing that comes to mind the slot A Dragon's Story is one of the perfect examples for such a game.