Are you a Britophile? Do you embrace the culture of London? If you said yes, then this online 5-slot reel is going to make you spend hours on it. Developed by the minds of Nektan, here is the British-centric gameplay, filled with vibrant graphics and symbols, that gives you the feel of the London world!

Want some more excitation? Play at Monster Casino the “Game of October 2021” and get real money prizes! 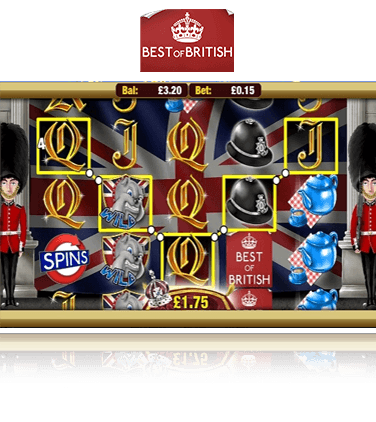 Get set to experience a whole new world of British and London from this adventurous online slot machine. From classic British symbols to bonus ones such as the teacup and bulldog, everything is now seen with the Best of British 5-reeled slot. Thanks to the idea of Nektan for making us visit London virtually through their renowned jackpots.

What’s more intriguing here is that the pay lines are available for 15 different strategies. So, your chances of winning the game are more.

Also, in the stance of presenting the best things and famous elements of British-period London, the game additionally has many other bonus features and free spins options. From wildcards to red post boxes, witness the aesthetics of Great Britain. Want the highest win of the game? Then, acquire the 5th symbol, inscribed with the words ‘Best of British’ over it!

As the British National Anthem welcomes you to the gameplay, you can spin and win at your convenience. Either you may lay down only one good pay line or decide to put your spin for all the 15 pay lines. The wagers will anyhow range between 0.01 and 1. And your condition to win a good value is when the pay line hits 3 same symbols of Best of British coins.

Note that the game will calculate the maximum bet value per one spin, based on the number of active pay lines you possess along with a specifically chosen stake. So, the ball is in your court; you can start the wager with minuscule bets ragging from coins that have the value of 0.01. Or for the daring Britishers, put your luck to the test by waging a bet for 15 coins and wait for the result.

One last thing to mind, even in the presence of symbols that have a lower value, the total winning value is decent in this Britain world!

The Symbols Collection with Estimated Payouts

When playing the game, you will get to see the huge Union Flag in the backdrop, which is under protection from the British guards. However, by considering the symbols of this reel slot, the beauty of London is dominantly viewed as compared to the general British culture.

Also, keep in mind that your highest pay is possible, only if you get the ‘Best of British’ symbol for the spin. Other symbols to look for in succession include the fish, chips, and the classic double-decker bus of London. A lower value is assigned to the number-related symbols namely 10, A, Q, K, and J respectively.

Your wild card will be the British Bulldog. So, this will make sure that all the other symbols get substituted in the spin rack. But the London underground-signed spin symbol does not go with the bulldog!

A Few Bonus Features to Get Updated

While playing the game, if you land on 3 or more ‘Spin’ scatter symbols, you are sure to trigger a free spin bonus. Also, on triggering the London Tunnel symbol, you get a surprise of 30 free spins!

Another bonus feature with this London world is that you can replace the existing symbols with a winning one using the Stacked Wild Symbols. Hence, start finding the British Bulldog. As per the in-game bonus feature, you will also have the golden opportunity to win some patriotic medals when you avail of both the wild and the stack symbol separately!

But above all, the fascinating point is that you don’t have to go with 50 to 80 spins to achieve the 30 free spins. You can effortlessly do it anytime during your play!

Best of the London City in Mobile Version

A few players say that the game reveals the patriotic side of the British. But some feel that the London perks and symbols in the game are still not enough! Overall, there are a lot of graphical components to experience from this game, thus making it worthy to play!

As a special note, the British-related coin slots and the reels from this game are highly relevant to be witnessed from your mobile phone. Though the gameplay is fun and exciting from all tech devices, it is a recommendation to experience this aesthetic world from your Android phones, iOS gadgets or even tablets!

Further, the slot is suitable for Desktop versions too since the quality of the game is liked by many professional gamers. PC gamers can still get a virtual experience of visiting the London tunnel with high-end graphics and big-screen excitement. The overall running of this game mode is quite smooth on any device.

Here is a Gist on the Variance and RTP Parameters

The RTP of the game is 96% which is the major plus point for gamers. So, whether you win a high value or low cash, you are still exiting this virtual British city with above-average percent of the money.

Though there are not many multipliers in this game, the bonus characteristics of Stacked wild and Free spins are sufficient to owe you a satisfactory wager.

Unlike other slot games where you spin and win the wager, your bets are more connected with the British patriotism. Which means, you will also get to know so many famous details related to British, ranging from double-decker buses to the popular bulldog.

For the players unaware of the beauty of London, this slot machine is truly a boon to them, as you get to know the intricate details of British with a slight chauvinistic touch to it!

Do share your personal experience (s) while playing this British-themed game and share your feedback on what was inspiring, attractive, or appreciable about the Best of British. And don’t forget to give some useful tips and strategy to the other Britophiles out there!