Wild Seas – A Cannon Ball of a Time

Bring justice to the waters of Port Royale in ELK Studios’ pirate themed video slot. Join the real life heroine pirate Anne Bonny as she seeks revenge against English, French and Portuguese captains who have looted local islanders. The game features wilds, nautical themed symbols, and a bonus game so fun, you’ll be yelling, “look at me, I’m the captain now” as you blast ships into oblivion. Try a free demo below.

Is the pirate life for you? Do it the legal way and for real money at 888casino, the top casino for January 2021. 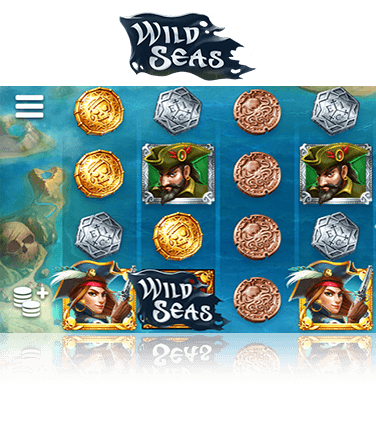 Wild Seas is a pirate themed video slot from ELK Studios. The game has five reels, 178 ways to win, and a theme as old as time, but don’t worry, the bonus game will have you yo-ho-ho-ing all the way to the bank. The game has three coin symbols and three icons for the three national captains. The highest paying symbol is Anne Bonny, who, once done shattering glass ceilings, can deliver some nice payouts. The base game is straightforward and has a black flag bonus symbol that replaces any symbol. If two are spun, the first bonus game level is activated. During the Break the Convoy bonus level, one of the captains is selected as your opponent. His ships, acting as wilds, occupy the fifth reel and sail one spot to the left for every free spin. During the game, Bonny’s vessel pops up behind them and lobs cannon balls at the ships. A damaged ship stops movement for one spin, and a ship sinks after three hits. Sunken ships become sticky wilds. If you manage to sink one ship before any ship crosses, you advance to the second bonus level called the Loot the Treasures game. This level is similar to the first, but instead of sailing ship wilds, Bonny’s balls bust open stationary treasure chests to reveal loot inside. These chests also act as wilds, that once hit, turn sticky. Watch out for the barrel symbol that explodes once it is hit effectively ending the bonus game. The game is truly plunderful.

Conclusion – It’s the Pirate’s Life for Us

Wild Seas is a game of liberation. Liberation from boredom, and liberation of the island peoples who suffered under the iron fist of European trading companies. We had an absolute blast blowing ships out of the water in this slot from ELK studios. With so many ways to win, an RTP of 96.3%, and a maximum win of 178,000 coins, you’ll have no trouble getting your hands on some of this pirate bounty. The only thing this game is lacking is an epic score to go along with the fantastic gameplay. But you will have no problem fixing that with any of the world’s numerous streaming options. So, sit back and enjoy the exploits of this oceanic Robin Hood, who this time, gets to keep some of the money. Let us know how you felt in the comment section below.