This slot is a fantastic creation from NetEnt, featuring a total of 243 pay lines, five reels and three rows. The slot is fully networked and presents a Return-To-Player(RTP) of 96.05%. Pay lines and reels can adjust to 78,125 and 7, whenever the raid spin feature is triggered.

Are you looking for a reputable place to play slots? Try Grand Ivy to play for fun or real money during June 2021. 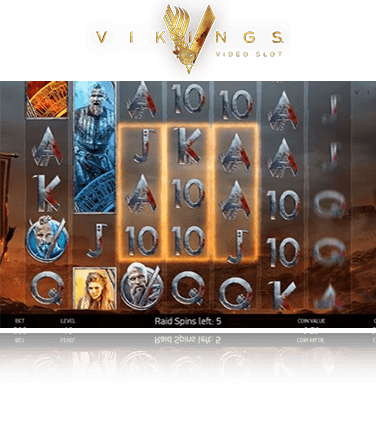 The popular Vikings TV series now has an official video slot courtesy of NetEnt. This slot features a couple of symbols, which can appear stacked from left to right on adjacent reels to signify a win. There are low value and high-value symbols within the three rows and five reels. Deposits range from 0.02-100 and can be wagered on nearly 243 pay lines for significant rewards.

A triggered raid spin would convert the play table to a 7-reeled 78,125 pay line with three hotspots. In this mode, rewards can be 10,000x the stake. The Viking slot also has a standard RTP of 96.05% and incorporates a stunning nordic theme and a suspenseful, dark soundtrack.

As a typical slot brand with a non-progressive jackpot, the min deposit is £20, whereas the maximum per spin is £100. This slot is accompanied by exciting bonus features like scatter symbols, multipliers and bonus rounds, and wild symbols, which offer more winning options. Punters are guaranteed very handsome rewards, depending on the win type.

For instance, you can hit seven of a kind matchups to secure wins that are 1x to 3.5x the original stakes. The shield wall holds mysterious icons that convert into trigger symbols for huge wins. Hotspots, on the other side, provide a scatter way to collect rewards.

This NetEnt title houses an array of different symbols. However, there are premium symbols like the gold “V” icon, which are lucrative compared to low-value icons. Common symbols include the regular 10s and four other low-value symbols, as well as popular acts from the series. Still, the game offers special symbols that include the raid symbol, along with the V symbol.

A gold V symbol offers the most rewards in regular spins, while the raid spin opens the game at its highest potential. The new interface, which has 7 reels and 78,125 pay lines, presents multiple ways to win the ultimate jackpot of 200,000.

The NetEnt slot houses three bonus features, including the raid spin, hotspot and the shield wall. Hotspots help convert stacked icons into trigger symbols, whereas the random wall holds mystery icons that turn into any symbol on the paytable guaranteeing huge wins.

On the other hand, the raid spin opens a seven-reel interface with three hotspots and over 78,125 ways to win. Free spins and bonus features are also inside the slot, making it all the more popular. The wild and scatter icons allow players to win without having to stick to the pay line choices by landing on hotspot areas.

This slot features a non-progressive jackpot, which allows you to spend as low as 20p per spin. Regularly, you can win rewards that are 607.5x the initial stake. However, by using the raid spins feature, you can augment rewards by almost 10,000x.

The highest winning amount is currently set at 200,000 per spin, so to secure victory, you need to match Vikings symbols on adjoining reels, starting from three matchups of a similar kind. This feature gets triggered when three scatter symbols get stacked on to the reels. Punters can also rely on the randomly triggered shield wall feature to bag more rewards and prizes.

Although the desktop version is more immersive and graphically appealing, the mobile version is still a convenient alternative. You will still be able to access the five reels and three rows comfortably without having to strain. The changing interface is even better and can accommodate the seven reel raid spin play table with numerous pay lines.

It is compatible with most OS and works seamlessly with blackberry and iOS powered phones. Upon sign up, you’ll get 100 free spins as a bonus. There is no significant difference between the PC and mobile versions, with each offering quite amazing graphics, soundtracks and fascinating gameplay.

This slot has five reels, 243 fixed pay lines and a further seven reels and 78,125 pay lines when the Raid spin is triggered. There are over eleven symbols, whereby stacking three or more similar icons translates to a victory. It has a medium to high variance, with a standard RTP of 96.05%, which many new and experienced players appreciate.

However, better rewards are obtainable via the play table’s bonus features, such as the raid spin. As a tip, when playing, try to wager on small sums over a longer period so that you can win the many bonuses and jackpot.

This is not the only exciting game that has a nordic theme. Other Norse variants of this slot include Vikings Runecraft and Vikings Go Wild. The former slot is a product of Playn’ Go, while the latter is developed by Yggdrasil gaming. The latter boasts innovative bonuses and features such as wilds, free spins, sticky wilds, and a treasure chest bonus.

Vikings Runecraft, on the other hand, has a 7*7 cascading set of reels that allow you to play repeatedly even after a win. It has numerous symbols like helmets, necklaces, hammers and Viking hamlets and many more.

Slots are sometimes referred to as one-armed bandits due to their capacity to empty your pockets. However, the Vikings slot gives you a fair chance to play and earn your money back via multiple bonus features, including hotspots and bonus features. From the raid spins to the shield wall, there are several ways you can get some money.

Free spins and scatter symbols are perfect for beginners and seasoned gamers to hone their skills while claiming real prizes. Hit the comments section to share your experience playing this slot, including bonus features and rounds.

up to £1,500 + 100 Spins on StarburstOur casino suggestion for Vikings
Overall Rating 9.7/10.0 Play here!
Full T&Cs apply. 18+. New players only. One bonus offer per player. Minimum deposit £20, max bonus bet is £5, bonus spins on selected games only and must be used within 72 hours. Bonus funds must be used within 30 days otherwise any unused bonus shall be removed. Bonus funds are 100% match up to £300 on your 1st deposit, 25% match up to £800 on your 2nd deposit, and 50% match up to £400 on your 3rd deposit. Bonus funds are separate to cash funds and are subject to 35x wagering the total bonus, cash & bonus spins. www.begambleaware.org.
NetEntAll 188 NetEnt slots at a glance
Popular Blog Posts
PlaytechAll 189 Playtech slots at a glance
ELK StudiosAll 20 ELK Studios slots at a glance
Home > Netent > Vikings