Invaders from the Planet Moolah Slot: Beam Me Up Bessie

It’s a bird…it’s a plane…it’s alien cows? In SG’s new celestial slot, extra-terrestrial cows have made their milky way to Earth. However, they aren’t interested in the knowledge of man, instead they are here for the milk and privies. We have a lot of questions, like “don’t cows produce milk?” “Why would they come all this way for a resource they produce naturally?” But luckily for the cows, they bring money, and if they keep showering us with coins, we’ll avoid putting our snouts in bovine business. Try a ‘lactose-free’ demo of the slot below.

Did the demo leave you over the moon? Play for real money at 888casino, the top casino for October 2021. 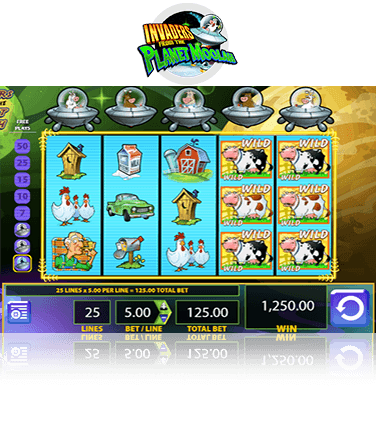 Invaders from the Planet Moolah is a five-reel three-row slot with 25 fixed paylines that pay from left to right. At the top of Scientific Gaming’s slot sit five UFO-piloting cows who, rather than the abductees, are the abductors. After each win, the winning symbols are beamed up by the cows, and new symbols fall into place for another chance at a payout. These abductions are the secret to unlocking the free spin feature. Four or more consecutive abductions can activate up to 50 free spins. An alternate set of reels is used during the free spins. Winning combinations during this feature payout the same as in the normal game. The game features a wild that replaces all symbols, and a mixed bag of farm related objects. There is one jackpot symbol that pays well but acts like a normal icon.

The slot’s graphics are as ridiculous as its theme. The technology used to develop the game doesn’t come close to the tech these cows must have used to navigate space. The reels and menu look like something a MS Paint-wielding 14-year-old would have designed in the mid-90s. That being said, the slot’s retro feel and spaced out sound effects give this game a special charm, and we couldn’t help but feel nostalgic for the old clunky computers of the pre-social media world.

At first glance, Scientific Gaming’s game looks like a video game from a bygone era. With gaming technology where it is today, it would be easy to cast this one to the side, but we think it still holds its own in a slot universe that at times, can seem as expansive as our own. The game lacks some of the bonus features that have become staples of the slot world (scatters, bonus games, cut-scenes etc), but sometimes that can be refreshing in its own kind of way. Invaders from the Planet Moolah has an RTP of 96%. If you’re looking for a no-frills game with a humorous theme, this bovine-themed game is perfect for you. Let us know what you think in the comments section below.