Beat the Beasts Mighty Sphinx is the second title from the popular Thunderkick’s series popular in the web as the Beat the Beasts series. In this wonderful slot game, you are immersed into the world of Ancient Egypt, whereas you can guess, rewards from Sphinx creature are expecting you as long as you meet its tough, but possible to be met requirements. Join this excellent slot with 9 active paylines.

Do you need a trusted casino for more fun? Have no doubts about seeing Grand Ivy where you can play best slot games in October 2021. 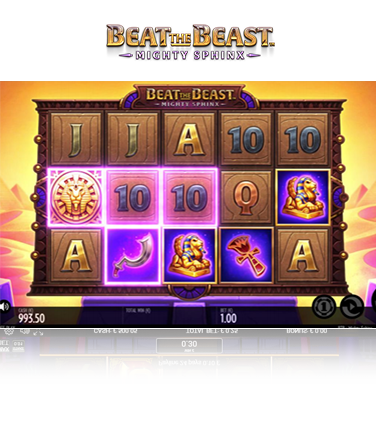 Beat The Beast Mighty Sphinx is an intriguing video slot that is a role model for the classic mystic games of the 21st century. It comes in an authentic Egyptian style and has a grid of 5 reels and 3 rows. With its 9 fixed paylines you can make great winning combinations, as well as to get fantastic bonus games where free spins and extra upgrades for the wild symbols are waiting for you.

Get situated around the popular pyramides and fight Sphinx to achieve fantastic results and get the maximum amount of a possible win here – 4,444x your stake. Don’t stop reading to discover how generous the paytable in the game is, too.

Beat The Beast Mighty Sphinx invites you in an authentic mystic trip where you should face Sphinx and collect symbols of different types aiming to unlock a bonus round and to use the free spins in the most potential for a winning way. The minimum bet here is only 0.10, while the maximum is 100 with which you can get a fantastic prize of up to 444400.

You can also use an autoplay mode to let the game choose the rounds per gameplay for you. If you are a traditional player, you can approach this Thunderkick slot with no fears for risk because the rules are clear and the paytable – generous. Only the highest win per pay line is paid out in case the combo is made from left to right.

Sphinx emblem comes to represent the scatter, but the wild symbols, too. If you succeed in getting 3 of these, you will be surprised to unlock the bonus round, where get additionally 5 free spins retriggered with wilds and scatters. All wild symbols can be replaced for any other symbol to increase your winnings.

The traditional symbols are limited as a number here, as the classical 9 is not available. To receive winning combos from A, Q, J, K and 10 you should collect 3, 4 or 5 of them. The most winning selection comes with the Sphinx statue, which has a high value, while the ancient Ankh, Khopesh Sword and Scarab are of a middle range.

You need at least three wild/scatter symbols of the golden Shinx emblem to appear on your screen to grab the in-house bonus round. With this extra feature, you receive 10 free spins, too. At the beginning of each free spin, you take benefits of, the game will automatically and progressively add from 1 to 3 emblems in a randomly selected position. If there are three equal of them, you can receive at least 5 more free spins.

Note that the bonus with the free spins can be retriggered round the whole gameplay. This is how the fun with Beat the Beast Mighty Sphinx never ends. Every time the bonus is once again retriggered one of the available special symbols with the middle range of value will become a wild symbol.

You can play Beat The Beast Mighty Sphinx with real money and in a free demo mode at any time and any place you want. Since Thunderkick has decided to make its gaming policy fully mobile-friendly from now all the titles from the Swedish developer are 100% responsive.

The attractive design of the slot game is not spoilt due to the smaller resolution mobile gambling requires. On the contrary, you will enjoy the same quality of content, as well as an intriguing autoplay mode that is very typical for the mobile users.

Beat The Beast Mighty Sphinx RTP is not as big as we would want it to be – the standard for Thunderkick titles, by the way, which is usually around 96.14%. The variance of this slot game is high. The volatility is roughly 144.

What we think that might get you some really massive success in this Egypt-styled game is not to give up from the classical approach of placing the maximum bet and looking for more and more retriggering chances in the bonus game. The free spins, though, are always with the stake from the general spins, so better avoid the minimum bet size of 0.10. It’s just going to be a total waste of time.

Beat The Beast Mighty Sphinx one of the eight Beat The Beasts games in one fresh, an intriguing and adventurous collection made by Thunderkick. The first slot from this collection is called Kraken’s Lair.

Both of these games are totally alike as to the main feature of the gameplay – a fight against a famous mythical creature – as well as regarding the general conditions for the paying lines and the collection of symbols. In both of the games, there’s a bonus round. Still, the environments are entirely different, aiming to emphasize on the developer’s idea to create a mystic collection formed of games with equal generous terms and conditions. Note that the company is about to release three more games of the same group.

Conclusion – The Best Slot in Thunderkick Beat the Beast Collection

Recognized as the most lavish and generous game within the Beat and the Beast slot collection by Thunderkick we would definitely give Beat The Beast Mighty Sphinx a motivating evaluation. The ambitious breakthrough within the sphere of 5-reel mystic games with bonus rounds and retriggering features seems to be a total 5-start upgrade within this Swedish gaming portfolio. If you love slots with a complicated scenario with numerous options to get some extra spins, this one is just for you.

up to £1,500 + 100 Spins on StarburstOur casino suggestion for Beat the Beasts Mighty Sphinx
Overall Rating 9.7/10.0 Play here!
Full T&Cs apply. 18+. New players only. One bonus offer per player. Minimum deposit £20, max bonus bet is £5, bonus spins on selected games only and must be used within 72 hours. Bonus funds must be used within 30 days otherwise any unused bonus shall be removed. Bonus funds are 100% match up to £300 on your 1st deposit, 25% match up to £800 on your 2nd deposit, and 50% match up to £400 on your 3rd deposit. Bonus funds are separate to cash funds and are subject to 35x wagering the total bonus, cash & bonus spins. www.begambleaware.org.
ThunderkickAll 22 Thunderkick slots at a glance
Popular Blog Posts
NextGenAll 111 NextGen slots at a glance
ELK StudiosAll 21 ELK Studios slots at a glance
Home > Thunderkick > Beat the Beasts Mighty Sphinx