You don’t need to be a rocket scientist to know that this game from Play’n GO is out of this world! Rocketing through the galaxy in your little tin can, it might help to have the guts of an astronaut, though. You could easily lose yourself in a Moonage Daydream as you spin, weightless, leaving gravity far behind you in this slot game. Try it for free below!

Ready to leave the safety of mission control behind? You can play for real money at Guts Casino, the top casino for January 2021. 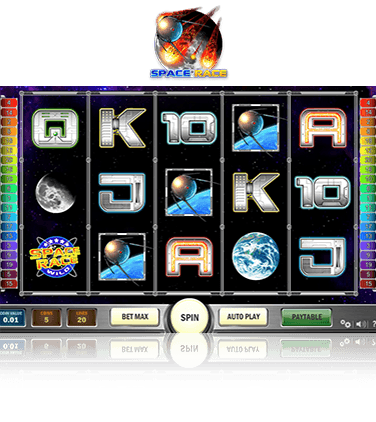 In a classic set-up, Space Race is a five-reel slot game, with up to 20 selectable paylines. You can bet up to five coins per line and adjust the coin value as per normal. There isn’t much out of the ordinary with this game, and if we’re being honest, the visuals aren’t as futuristic or sci-fi as you might hope. Think of it as a video slot that’s more Space Invaders than Interstellar. It’s also lacking in any real soundtrack. The intro has predictably low-budget sci-fi music, but during gameplay there are only basic “spacey” sound effects. It does have some decent extras though, as you would expect from a Play’n GO title. The wild symbol is a big help in getting winning combinations, and the scatter symbols allow for a win with only two matching icons. Spot three or more meteor symbols from out of your spaceship window and you’ll fly straight into a meteor shower. You get 15 free spins during which the meteors act as wilds. Normally space is a lonely place, but if you happen to be close to three rockets at once, then it’s time to tell Houston you have a Bonus Round. Clearly inspired by Battleships, you need to safely guide your spaceship through increasingly difficult levels of asteroid showers. Just don’t let that droid remind you that the odds against successfully navigating an asteroid field are 3,721 to one!

With simple game play, you don’t need to be a veteran to play this game. Even wookie players can have a blast. The Moon Landing round is a major (Tom) bonus, which is as fun as any bonus round out there if you ask us. It does need a refit of its visuals and soundtrack before it’s the star in Play’N GO’s selection, but Space Race is still definitely operational. Played the game? Take part in the debrief and let us know whether your mission was successful in the comments section below.